My blogging has been spotty as usual. Generally, due to a lack of anything to say, or anything interesting to bestow upon anybody. Lately, it's been more of a case of not wanting to depress anyone. Nobody reads the freaking thing anyway. Who in the living hell am I kidding?
I've been drawn very heavily into revisiting music that I haven't heard for years. Robin Trower's "Bridge Of Sighs", at the top of this list. Listening to the lyrics, it isn't hard to see the reason.
"A cold wind blows. The Gods look down in anger on this fool child. Life's so unforgiving and why so cold. Been a long time crossing the bridge of sighs."
Its like the small slope my therapy dog and I have to pass through on our morning walks. It's heavily covered in snow and ice, left behind by the recent storms. Rainy insists on going through it, even though she slips and slides. I barely make it, having to hold on to a chain-link fence next to the pavement, to avoid falling and trying simultaneously to maintain a grip on the dog's lead.
This icy hill could easily be a metaphor for my entire life. Sliding backwards, never being able to manage a grip on happiness or self-realisation.
I've fought depression for the forty-plus years I have been living on this planet, in a body I hardly recognise as my own, anymore. The struggles with heart disease and diabetes have not helped in the least.
My job does little to abate the frustration, anger and sadness. It usually fuels the fires of all three. Working with idiotic children who I'm old enough to be the biological father of. Non-comittal managers and last but certainly not least, a general public that believes that the meaner you are to those who are "below your station" in life, the more you will be satisfied with your service. If it sounds like I'm whining, you would be well off the mark. Two fingers up and happy landings on an f'ing chocolate bar. :P
Let's see how anyone likes going to a cash machine to take out forty bucks, so that the bill collectors will stop nagging you, only to find out that you have no money. Sorry. It all got spent on food and rent. Actually, it barely covered even that. I've been living out of charitably donated tins.
How about having your utilities cut off, on the eve of a Winter storm? Sounds like buckets of fun, doesn't it? This is what it's like to be dirt poor.
That said, I can't take any more of it.
Uncle, or whatever you shout when you have simply had enough and don't see matters improving one damn bit.
If I don't see the dawn of another crappy day, it wouldn't bother me in the least. In fact, just the opposite.
Posted by R.A. Levin at 6:52 PM 1 comment:

Going almost stark-raving bonkers, since my happy Hippy Anarchist homebrew computer took a massive hit. The local mains supply is notably anarchic itself. 110 Volts, 220 Volts, whatever!
Blew up the power supply, fried the Mobo like a rasher of Bacon! It's in Compy Hospital now, awaiting multiple transplants.
I'm now, temporarily (I hope!) tapping away on the loaner laptop generously given to me by Patti, who is co-owner of aforementioned Hospital, until my trusty old friend can be brought back from the dead. Such is life.
So, where is the bright light shining, on the outskirts of "Bummerville", I hear you cry. Well, aren't you? Sorry! A touch of pre-varication on my part.
My Doctor had been nagging me about why I should have an assistance dog, for the longest time. I usually fobbed him off with one of my many excuses. "Too expensive to care for one properly.""Not enough room in the apartment." "I can't spend enough time with one to make them happy." "It would be a violation of my lease". He refuted that last one with: "I'll write up a prescription".
Little did I know, that my new best friend was puttering about, biding her time, until I gave up and said "Yes"
Rainbow, a Golden Retriever, Black Lab mix, has adopted me!
She's got me wrapped around her webby little paws and I can't do anything to stop it.
Not like I really want to stop it, though. I'm madly in love with this silly, beautiful, loving Pooch!
Now I'm off to get one of those "A Spoiled-Rotten Lab Lives Here" plaques to hang on the kitchen wall!
Posted by R.A. Levin at 9:44 AM No comments: 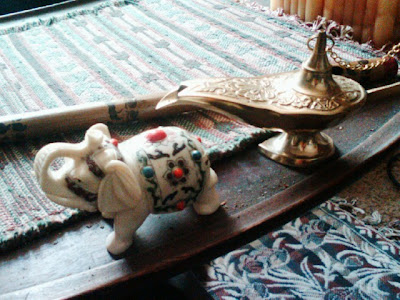 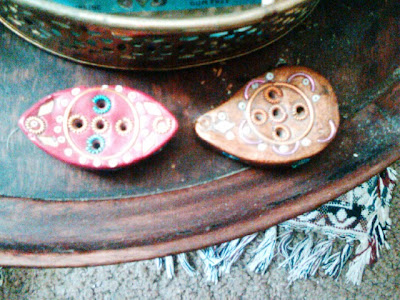 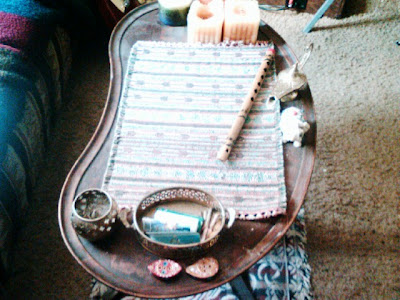 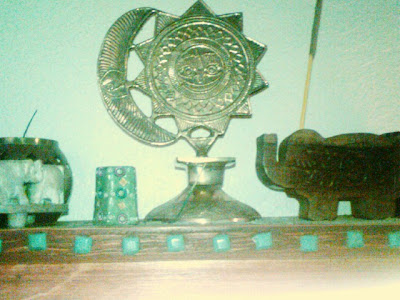 Further confirming my status as an Incense addict, some mobile phone cam shots of the paraphernalia associated with this unquenchable obsession. Burners!
I've left out more than a few, concentrating on the ones I thought were interesting enough to display on the blog.
The Feng Shui Elephant in photo 1. is not an incense burner. The Aladdin's lamp next to it, is.
The flute shown on the coffee table isn't a burner either. It's a potential musical instrument. In my hands, however, it is an instrument of torture! Hari Prasad Chaurasia, I'm not!

A view of the blacklight jungle 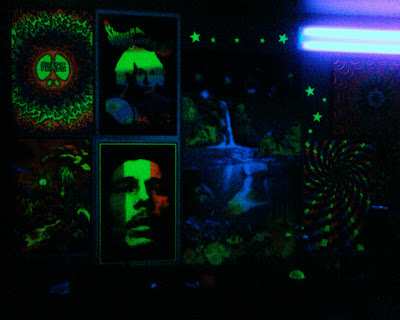 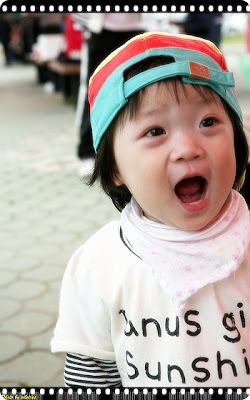 Can somebody tell me what in the unholy hell this T-shirt really says?
Posted by R.A. Levin at 4:31 AM No comments: 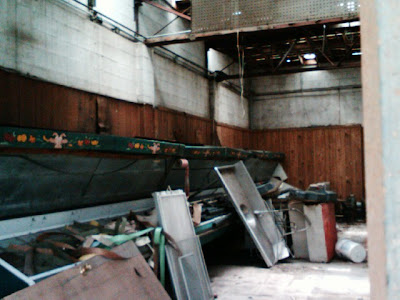 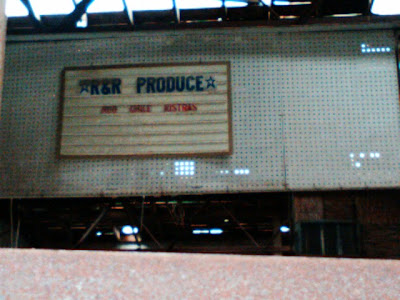 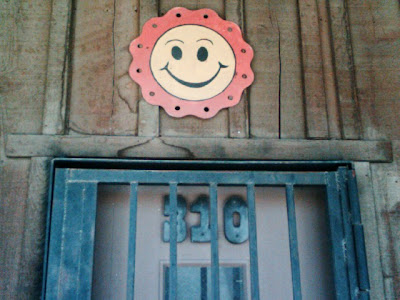 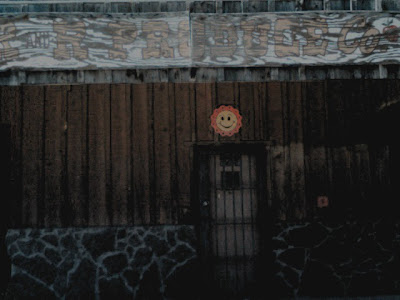 Here we have the long since evacuated R&R Produce Company, located in West Maloney Avenue.
I've lived near the place for the past 15 or so years and it was closed then!
It's become less of a mystery in the past few months, since someone (probably from our local drunk community) decided to knock the front door down, resulting in the fine interior shots before your eyes.
The reference to the "Chili Ristras", is something confounding to non-New Mexicans. Ristras are wreaths made of Chilis, generally for the X'mas season. That would indicate that this Greengrocers closed down sometime in December of one year or another.
This shop must have had quite a variety of Fruits and Vegetables. The doors were probably shuttered when the owners came to the shocking realisation that nobody in town considers any plant matter aside from potatoes as a food source.
Posted by R.A. Levin at 5:36 PM 2 comments: 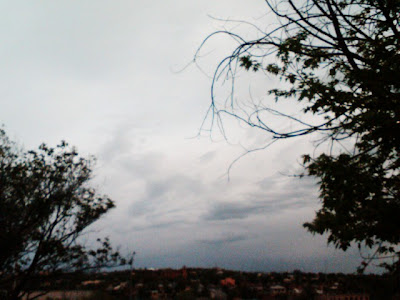 Just a few weeks ago, it was Snowing in Gallup.
Now, roughly four months ahead of schedule, the Monsoon season seems to have arrived.
Make no mistake about it. These aren't the "Monsoon-alikes" that California and a few other places get. The moisture streaming up from the Gulf Of Mexico, that combines with some of the flow off the Pacific results in the same sort of weather you would expect in Singapore, Mumbai,
Bangalore and Hong Kong.
No complaints, other than the rising humidity makes every old injury my body has dealt with come back at once. Painkillers and an umbrella, please.
Posted by R.A. Levin at 7:08 PM 2 comments: 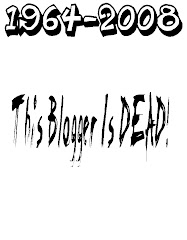 R.A. Levin
I hold a doctorate in Pataphysics. Sometimes I need to let go of it, because my hand cramps up.